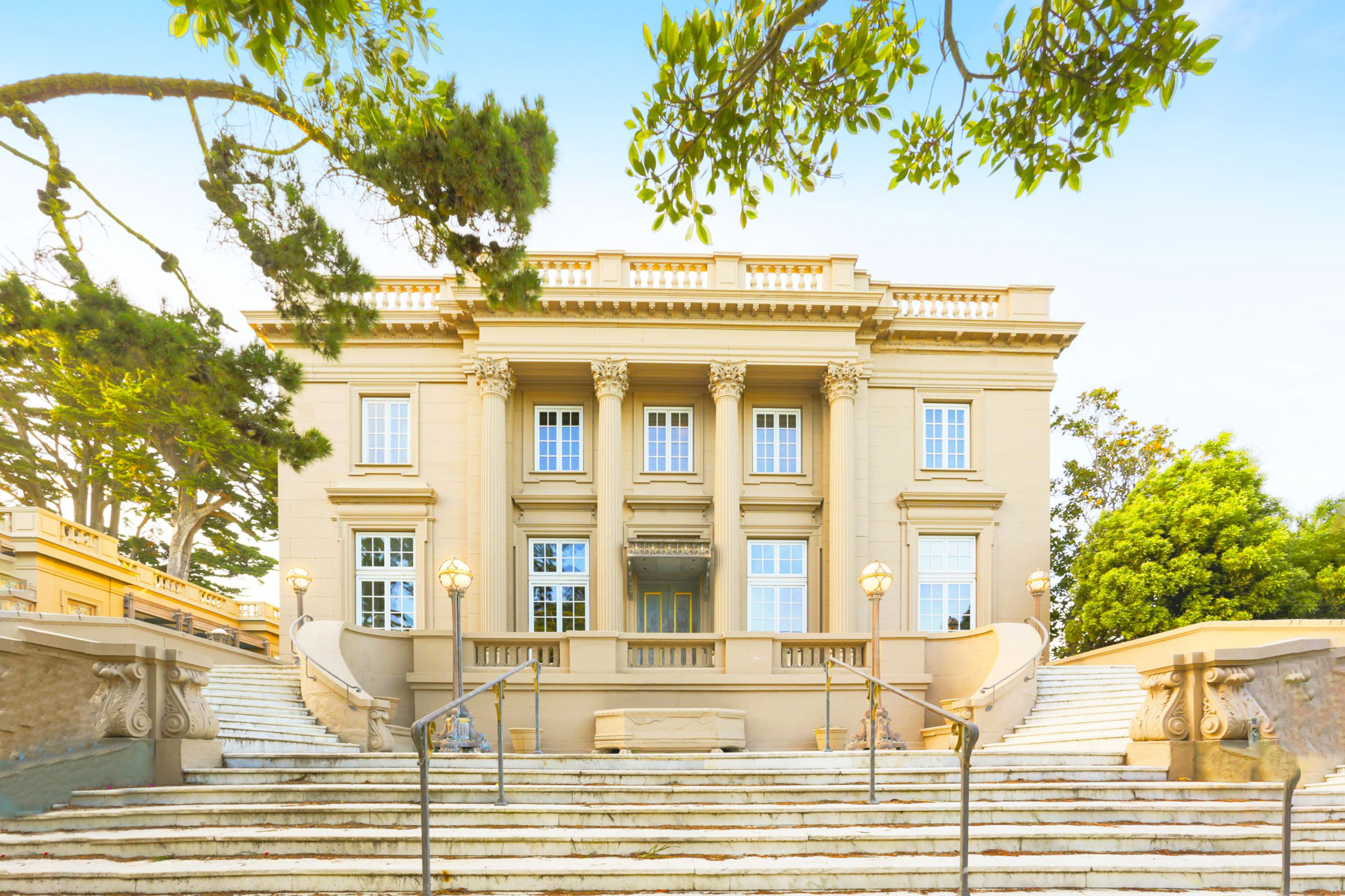 Stunningly re-imagined for the 21st Century, the breathtaking Le Petit Trianon was originally built from 1902-1904 for one of the City’s most prominent families of the era, and is inspired by the original world-renowned building at the Versailles Palace in France, which was constructed between 1763 and 1768 by King Louis XV.

The iconic, historically irreplaceable facade of Le Petit Trianon is one of the world’s most recognizable images. Designated as both a San Francisco as well as a National Historical Landmark, and considered one of the City’s most exquisite architectural masterpieces, this extraordinary monument has been host to a glittering array of some of the most important social, cultural, artistic and philanthropic events in San Francisco history.

Evocative of another era of 18th-Century grandeur, this timeless masterpiece has seen yet another dazzling re-incarnation in its legendary history by the 2019 San Francisco Decorator Showcase for a glamorous and contemporary lifestyle... truly one of the world’s most extraordinary private historical residences...

- The graceful circular entry with patterned marble flooring is framed by slab marble walls punctuated with 6 Ionic columns and 4 rounded French doors looking into indoor gardens on each side, and crowned with a domed ceiling- providing an elegant entrance into the grandeur of the palatial entertaining spaces that lay ahead.

- A sensational 3-story high marbled central atrium is crowned by a decorative stained-glass skylight and surrounded by solid marble Doric columns creating a sense of architectural grandeur and symmetry. The volume and scale of the spaces make this a dazzling backdrop for a modern world-class art collection stunningly juxtaposed with the iconic classical architecture.

- A palatial marble staircase leads to the upper two level of this Chateau-style residence. The graceful landing between the 1st and 2nd floors overlooks the main central atrium and is perfect for entertainers or a speaker. An elegant winding staircase with two landings goes down to the lower level. Back staircases service all levels.

- Off the central atrium is a large back foyer with French doors leading to stairs down to the back gardens.

- The side vestibule works a wonderful gardening/ flower arranging/ mudroom and a sink with white Carrara marble counters and flooring. Whimsical wallpaper, an antique mirrored backsplash with decorative gilding and a gold leaf ceiling add to the charm of this lovely side entrance into the home.

- The original Hall of Mirrors-inspired, Versailles-style ballroom has been transformed into a super-chic modern nightclub. The extraordinary original architectural detailing including the one-of-a-kind 3-dimensional moldings provide a stunning backdrop to the contemporary palette of atmospheric colors, textures and fixtures. The inset mirrored panels reflecting the scale of this incredible space, a raised stage perfect for entertainment, and a large Calcutta Viola marble-clad bar with inset lighting, and three under-the-counter wine and regular fridges truly make this the penultimate entertaining space for large events as well as for more intimate gatherings of family and friends.

- Off the kitchen is a sitting/ lounging/ dining area looking onto the garden though decorative grillwork. As well as a very large butler’s pantry with two wine fridges and abundant storage for China, crystal, silver and linen.

- A mirrored powder room with retro/modern sink services this level of the residence.

- A bedroom suite with full (unfinished) bath is perfect for staff or long-term guest quarters.

- A transitional foyer with steel and wood moldings and herringbone oak and patina steel flooring and wall panel leads to the garden entrance.

- Designed in a Classical French style with winding parterres and surrounded by lush greenery, the spectacular formal garden is accessible from both the main and lower levels- and is perfect for displaying a modern sculpture collection.

- Highlighted by Palace of Versailles-like double wrought-iron swinging gates topped with folded Fleur-de-Lys, the beautiful cobblestone driveway has outdoor parking for up to 6-8 cars and leads to a two-car indoor garage (located in 3810 Washington, but deeded to the property). The side entrance to the main level of the home is off the driveway and is a beautiful patina glass and wood portico with elaborate acanthus leaf detailing framed with columns.

- The massive 2nd floor landing off the grand marble staircase opens to and encircles the 3-story central atrium and is flooded with light from the stunning stained-glass skylight high above, creating a wonderfully flowing floor-plan on this level.

- A Southwest corner bedroom suite has a marble bath with walk-in glass shower, decorative fireplace, and an adjoining sitting room with wet bar- creating a wonderful private office for this level.

- A large square landing wrapping around the central atrium and lined with lush greenery giving the feel of an indoor garden provides a wonderful approach to this level as well as a wonderful interconnection between the various rooms.

- The Northeast corner bedroom/sitting room features a Venetian plaster ceiling, fireplace, and French doors leading to the balustraded terrace with view of the City and Bay encircling the entire top floor of the residence.

- The entire South wing of this level is a separate guest suite/ children’s quarters including wetbar/ kitchenette with banquette seating and marble counters, a serene spa-like bath with Japanese-style soaking tub and skylight, bedroom, as well as a den/ dining room with terrazzo tile flooring, box beamed ceiling and a French door to the terrace.

The iconic, historically irreplaceable facade of Le Petit Trianon is one of San Francisco’s most recognizable landmarks and is considered one of the important examples of Neo-classical architecture. The architectural symmetry is defined by four 2-story high Corinthian columns and sweeping curved double marble Palladian-style staircases punctuated by the historical frosted glass lamp posts surrounded by greenery and crowned by classical acanthus leaf detailing and balustrades.

San Francisco has several representations of European landmarks, including Marie Antoinette’s Le Petit Trianon. The original building at Versailles Palace in France was built between 1763 and 1768 for Louis XV’s favorite mistress, Madame de Pompadour (Jeanne-Antoinette Poisson). Unfortunately for her, she died before the estate was completed.

Louis then gave it to his next favorite mistress, Madame du Barry (Jeanne Bécu). When Louis XVI became monarch, he gave the estate to his wife, Marie Antoinette, who used it as a retreat from palace life. The architecture was called the Greek style, a transition between the Rococo of the early 18th century and the Neoclassical of the later part of the century.

The Presidio Heights copy is located at 3800 Washington Street and is designated a San Francisco and national historic landmark. It was built from 1902 to 1904 for Marcus and Corinne (Cora) Koshland. Marcus Koshland was the son of Simon Koshland, who founded Koshland Brothers – a firm importing and exporting wool, hides, and fur.

Simon came to the United States from Bavaria, first moving to Philadelphia, then Sacramento in 1850, before settling in San Francisco. Marcus and Cora were the parents of Daniel Koshland, a president of Levi Strauss & Co. and the namesake of the Daniel E. Koshland San Francisco History Center at the San Francisco Public Library. This house was his boyhood home.

The Koshlands decided to build this house after visiting Versailles. The Washington Street side of the house is a faithful representation of the original Le Petit Trianon. The building, almost 18,000 square feet, has a grand marble staircase leading to a front terrace, and a three-story atrium with marble columns. The first floor features conservatories on either side of a marble rotunda. The house originally had eight marble fireplaces and more than 20 rooms. Daniel Koshland said, “It was always a home,” even with its huge size. It is still a single family house.

The Koshland’s housewarming party was a Marie Antoinette costume ball. Invitations were purchased in Paris and hand delivered to the invitees. Two years after it was built, the home withstood the 1906 Earthquake and Fire, but the columns and steps were damaged, as seen in the following photo. The Koshlands opened their home to 60 people after the earthquake. One person recalled going to Fort Mason daily to get water because the water mains were broken.

Cora Koshland, a founder of the San Francisco Symphony Association and one of the first directors of the San Francisco Opera Company, used her home to present concerts. She invited music critics to review the performances, which were hosted in the rotunda rather than the ballroom because it had better acoustics. She could accommodate almost 100 guests sitting on the stairs and the floor.

Yehudi Menuhin and Isaac Stern both had their musical debuts at the house as children. Cora Koshland was among several people who paid for Stern’s music education, and she convinced one composer who did not like child protégés to listen to Menuhin, with the result that the composer agreed to compose for the young man. Many other artists played or visited the home, including Igor Stravinsky, Jascha Heifitz, and Leonard Bernstein.

For decades Mrs. Kohsland was one of the City’s premiere social fixturesT, hosting concerts and massive parties in the lavish ballroom. When she passed away in 1953,it was sold to the Buck family who remained in it for decades. In 1982 it was the site of the annual San Francisco Decorator Showcase- and now, for the 2nd time in history, the 2019 Showcase.

Only steps away from the open expanses of the Presidio lies the Laurel Heights/ Jordan Park neighborhood. Impressive hundred-year-old Victorians and Edwardians mix lyrically with bright stucco bungalows, sizable apartment structures, and updated modern residences. Jordan Park/Laurel Heights has become home to many upscale families with young children. Private schools dot the area, including Laurel School and Live Oak. Some of the finest public school education is also available at the Claire Lilienthal Public Elementary School on Sacramento Street. The school boasts a California API over 900.

Lined with elegant shops, Sacramento Street in Laurel Heights, is a shopper’s paradise. One quaint storefront after another serves the desires of the stylish passersby. Find a taste of wine country and exquisite gifts in the Sonoma Country Store. Grab your more regular household needs at the nearby Laurel Village Shopping Center, complete with grocery, hardware, and drug stores.

Don’t miss the popular restaurants, cafes, and specialty bakeries in Laurel Heights. A short walk to Dolce & Salato will reward you with delectable pastries, and quiches. Those fortunate enough may stumble happily upon Magic Flute Garden Ristorante, the roomy trattoria at Presidio and Sacramento Streets. Its serves as a fixture, bringing old-world Tuscan flavors to the neighborhood.

Combining purposes as an athletic center and as a local presenter of cultural arts, the Jewish Community Center welcomes all, and is a community hub for the area. Close by, and convenient, is the California Pacific Medical Center on California Street. Overall, a great neighborhood, with excellent transportation options for easy coming and going.